Gibson Brands, the world’s most iconic guitar brand, has shaped the sounds of generations of musicians and music lovers across genres for more than 100 years. Founded in 1894 and headquartered in Nashville, TN, Gibson Brands has a legacy of world-class craftsmanship, legendary music partnerships and progressive product evolution that is unrivaled among musical instrument companies. The Gibson Brands portfolio includes Gibson, the number one guitar brand, as well as many of the most beloved and recognizable music brands, including Epiphone and the Gibson Pro Audio division. Gibson Brands is dedicated to quality, innovation and sound excellence so that music lovers for generations to come will continue to experience music shaped by Gibson Brands. 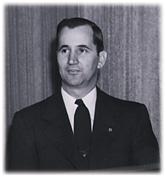 By the time Gibson began work on its first electric guitar, the company had a 40-year tradition of quality and innovation to uphold. The first Gibson electric had to be nothing less than the best electric guitar the world had ever seen.

In the spring of 1935, Gibson enlisted musician Alvino Rey to help develop a prototype pickup with engineers at the Lyon & Healy company in Chicago. Later that year, research was moved in-house, where Gibson employee Walter Fuller came up with the final design.

Gibson introduced the distinctive hexagonal pickup on a lap steel model in late 1935. The pickup was installed on an F-hole archtop guitar, dubbed the ES-150 ES for Electric Spanish), and the first one shipped from the Gibson factory in Kalamazoo, Michigan, on May 20, 1936.

The ES-150's success was a double-edged sword, establishing Gibson as the foremost maker of electric guitars but at the same time challenging Gibson to top this monumental achievement. After a production break for World War II, Gibson did just that.

The Golden Age of Innovation

In the years after World War II, the electric guitar came of age and Gibson entered a golden of age of innovation. The P-90 pickup, introduced in 1946, gave guitarists new power and versatility. Under the aggressive leadership of company president Ted McCarty, Gibson debuted two new concepts in 1949 with the ES-5, the first three-pickup guitar, and the ES-175, the first guitar with a sharply pointed cutaway bout.

The advent of the solidbody electric guitar posed a new challenge for Gibson. Like the ES-150 in 1936, Gibson's first solidbody electric had to uphold Gibson tradition while going a step beyond all other guitars of its kind. A carved contoured top harkened back to the very first Orville Gibson instruments of the late 1800s, and a gold finish signified a value above all others. With the endorsement of the most popular guitarist of the time, Gibson introduced the Les Paul Model in 1952. The Les Paul quickly grew into a family of four models-the Junior, Special, Standard and Custom - all of which would become Gibson classics. Gibson's top models sported McCarty's new tune-o-matic bridge, which was introduced on the Les Paul Custom in 1954 and is still the standard Gibson electric guitar bridge. In 1958 McCarty debuted not one, but two radical new ideas-a semi-hollowbody electric and a group of exotic, futuristic solidbodies. The ES-335 was an instant success, combining traditional archtop styling with modern, solidbody construction. The Flying V, Explorer and Moderne proved to be decades ahead of their time.

Gibson pushed on into the 1960s with two more bold, modern solidbody lines-the double-cutaway SG models of '61 and the reverse-body Firebirds of '63. By the time the McCarty era ended in 1965, a foundation of classic models had been laid that would carry Gibson through the rest of the century.